skip to main | skip to sidebar

Megadeth: Another Time, A Different Place from powerHouse books!

Megadeth: Another Time, A Different Place Megadeth: Another Time, A Different Place gives the audience a front-row seat into the early days and meteoric rise of this young band who would become one of the most influential groups of all time and, with Anthrax, Slayer, and Metallica, consistently touted among the best “thrash metal” bands ever to cross the stage. This is the first Megadeth photography book and only the second book documenting their rise to rock glory, including rare, never-before-seen photographs representing a small but crucial period of time in their career. Hale’s photographs, from intimate backstage photographs to screaming, kinetic live shots, are the images of a young band prepared to take on the world.

“The ‘work’ that you hold in your hands now is the work of a friend, who is also a ‘photo-grrrrrrr-apher,’ and who has captured the very essence of my career: hungry, gritty, hard, cold, impersonal, personal, and very personal. Also, the sensitive unseen side of me, which was somewhat of an anomaly with the public and left me an enigma to my peers.”
—Dave Mustaine from the Foreword 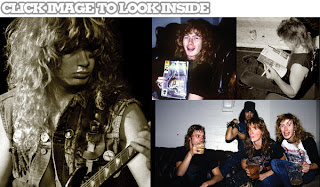 Bill Hale started photographing rock and roll bands in 1979 at the age of 18. In the 80s, Bill was the Chief Photographer for Metal Rendezvous International Magazine. While on staff he was able to shoot many of the top bands of the day including Deep Purple, Black Sabbath, Riot, and UFO. Bill was fortunate enough to photograph many legends on their last tours of the states, Phil Lynott (Thin Lizzy), Bon Scott (AC/DC), Freddie Mercury (Queen), and Rory Gallagher, to name a few. He also photographed Metallica and published his work on them in a book called Metallica: The Club Dayz 1982-1984 (ECW Press, 2009). Bill now lives in Hawaii and still works with rock-and-rollers.
Posted by Photo Books By Bill Hale at 9:48 AM

Megadeth: Another Time, A Different Place

Photo #3 = Dave backstage at the Stone

Group shot Backstage at The Stone 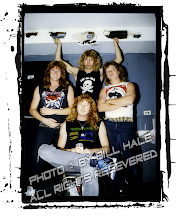 Live at the Keystone Palo Alto

Dave backstage at the Stone

Megadeth Another Time A Different Place 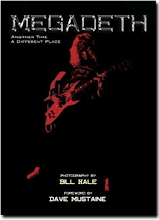 Have your copies autographed by author/photographer Bill Hale!

Prices below cover the costs of return shipping and handling only. Contact us in advance for more information @ photosbybillhale@gmail.com. We may not always have this item in stock. Order from amazon below and have it shipped to us. If you already have your copy of Megadeth Another Time A Different Place and wish to have it autographed you can mail it to us (along with a check or money order if you prefer) to cover the cost of shipping and handling.

Megadeth Another Time, A Different Place

"Bill Hale's new photo book on heavy metal supergroup MEGADETH entitled Another Time, A Different Place is an absolute masterpiece! This book not only boldly reveals the visual history of thrash metal through the eyes of Mr. Hale but also truly captures the alcohol-fueled, testosterone-laden insanity that was 'Bay Area thrash metal' of the early '80s. Having been one of Metallica's first and foremost photographers during the band's early club days back when (Megadeth founder) Dave Mustaine was in Metallica, Bill Hale built a strong bond with Mustaine long before the formation of Megadeth which allowed Mr. Hale an exclusive all-access photo-pass to photograph the formative years of Megadeth, onstage and offstage. Another Time, A Different Place continues where Bill Hale's first book, Metallica: The Club Dayz 1982-1984, left off, as it photographically elucidates the thrash-metal roots of the legendary Dave Mustaine!"

Megadeth Another Time A Different Place at amazon

Links to our sites and networks

Check out our gallery of scenic Hawaiian photos available for download at Big Stock Photo!

Photo Books By Bill Hale
Photos By Bill Hale is a photography company in Honolulu, Hawaii that specializes in Rock and Roll Photography and Scenic Hawaiian images.